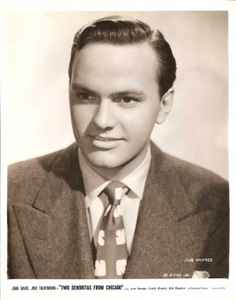 He is best remembered today for co-writing the song "That's All", considered part of the Great American Songbook. He was the younger brother of singer and actor Dick Haymes.

Haymes began his career in the early 1940s as a vocalist in the bands of Carl Hoff and Bob Chester.

In 1942 Haymes began work, under the name "Bob Stanton", for the radio show Gillette Cavalcade of Sports. He continued with the program until 1946, when it was turned into a television show on NBC; he then became the host of the television show until 1949. He also began to serve as the host of other NBC shows, all under the name "Bob Stanton", including game show Campus Hoopla during the show's run from 1946 to 1947, Television Screen Magazine in 1948, the country music show Village Barn in 1949, and the show Around the Town in 1950.

During this time Haymes also began to appear in movies, including Is Everybody Happy? (1943) and Mr. Winkle Goes to War (1944). He usually appeared as "Bob Haymes", though in several films, like the 1945 Abbott and Costello in Hollywood, he was credited as "Robert Stanton" (a screen name that had been used earlier in the 1940s by film actor Kirby Grant).

In 1952 he had his only known television acting job, starring in the DuMont Television Network sitcom It's a Business with Leo De Lyon; the two played Broadway song publishers. He appeared under the name "Bob Haymes".

In the 1950s, Haymes began work as a songwriter. In 1952 he co-wrote the song "That's All" with Alan Brandt. The song was first performed by Nat King Cole in 1953, but truly became a hit when recorded by Bobby Darin in 1959. It has since been covered by dozens of artists. In 1953 Haymes co-wrote, with Nick Acquaviva, the song "My Love, My Love", which became a hit when recorded by Joni James (Acquaviva's wife) that year. In the mid-50s he co-wrote the song "They Say It's Spring" with Marty Clark; the song was made popular by jazz singer Blossom Dearie, who recorded it on her 1957 album Give Him the Ooh-La-La. Around the same time, he wrote the song "I Never Get Enough of You", which was recorded by his brother Dick.