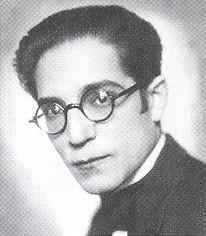 Real Name:
Vlaho Paljetak
Profile:
Vlaho Paljetak (1893-1944) was the greatest Croatian pre WWII chanson composer and singer. He was born on August 7, 1893 in Dubrovnik in the Austro-Hungarian Empire which is now a part of modern Croatia. Vlaho was educated in Arbanasi, near Zadar, and worked as a teacher in Hvar and Vis. He studied singing and violin and was a self-taught guitarist. For a time he was a member of a small orchestra in Split which was run by Jakov Gotovac and Ivo Tijardovic. From 1919 he worked as a prompter in the Zagreb National Theatre. During the 1920's, 1930's and 1940's he recorded about 60 songs and chansons. By the early 1940's he was already seriously ill, and died after an unsuccessful operation, on October 2, 1944 in Zagreb. His last performance was on September 28, 1944 at a Zagreb radio show.

Here are two famous "Evergreens" of this remarkable author: