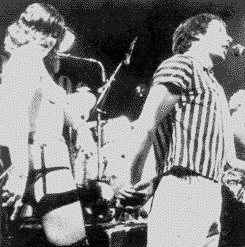 The Art Attacks was a British punk band from April 1977 to March 1978. Their songs released as singles were "I am a Dalek/Neutron Bomb" and "Punk Rock Stars/Rat City". The group was formed by Edwin Pouncey and Steve Spear, two students from the Royal College of Art, London for a one-off gig at the college. They were asked to do a gig at Wimbledon College of Art and this led to the bands' short career. They had two tracks on the, "Live at the Vortex" (NEMS) compilation album, (Frankensteins Heartbeat and Animal Bondage) and one on the "Streets" (Beggars Banquet) compilation album, (Arabs in Arrads). They played at most of the London punk club and pub venues including The Marquee, Nashville and Vortex supporting bands like Generation X, 999, The Motors and The Lurkers. They also played out of town at venues in the south and north east of England. Their tracks have turned up on various punk compilations over the years and were collected and released with a bootleg live recording on the "Outrage and Horror" album (Overground Records).
Aliases:
Tagmemics
Members:
Edwin Pouncey, John Haney, Marion Fudger, Richard Wernham, Steve Spear
Variations:
Viewing All | The Art Attacks
Art Attacks, Art Attax, The Artattacks