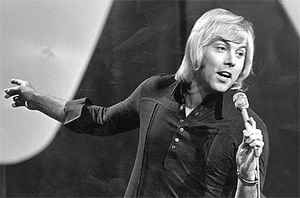 Started his career in the 60's as the lead vocalist for The Islanders, a Helsinki-based pop-rock band, along such names as Pepe Willberg and Kirka. Recordings with the band were sung in English, but as he moved on to a successful solo career, he switched to Finnish.