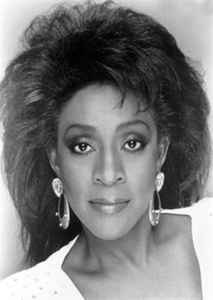 Profile:
Soul singer - songwriter.Born on 22 August 1946 in Sumpter, South Carolina
She was a member of the popular New Jersey girl group the Clickettes and recorded many pop-soul sides with them in the late ’50s and ’60s. She returned in the ’70s to record two albums of lushly produced soul with a concentration on sensual ballads. After a brief hiatus, she re-teamed with the Clickettes in the ’90s to tour the oldies circuit. “I’m Living A Lie” is included in several northern soul compilations. A great cover of Bacharach/David “Don’t Make Me Over” and Francis Lai “Love Story” are the highlights of this forgotten gem.
She went solo from 1964.
In the late 70's she got involved in the disco scene and later in the hi-NRG scene as dance music diva.
In Groups:
The Clickettes, The Fashions (9)
Variations:
Viewing All | Barbara Jean English
B. English, B. J. English, Barbara, Barbara English, Barbara Jean, English