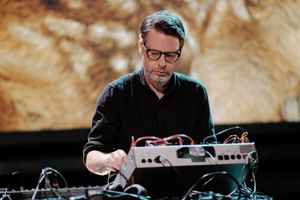 Real Name:
Jan Jelinek
Profile:
Berlin based Jan Jelinek is a DJ, musician, producer and remixer. He started as a record collector of dub, jazz, funk and soul until he discovered house music. Then he started making music. Since 1998 he has been releasing records under a number of pseudonyms. The records he releases under his own name are ambient songs based on old jazz recordings.
Sites:
janjelinek.com, Bandcamp, faitiche.de, MySpace, Wikipedia
Aliases:
Farben, Gesellschaft Zur Emanzipation Des Samples, Gramm, N. Gratin, The Exposures
In Groups:
Beispiel, Center Of Excellence, Groupshow
Variations:
Viewing All | Jan Jelinek
Jan Jelineck, Jan Selinek, Jelinek

May 7, 2022
What can I say... he's a genius.
Whether under his own name or under his pseudonyms, a music in constant evolution, an escape from the current musical monotony...

June 3, 2017
The king of minimalism,thats all there is to say about this genius!LONG LIVE JAN!