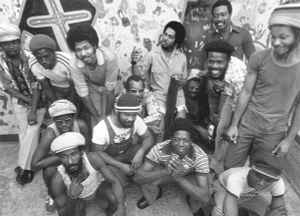 Profile:
Do not confuse with the early 1960s ska band --> see The Upsetters (3), or Little Richard's The Upsetters (2).
Lee Perry's studio band for the Upsetter label - the same as in Lee Perry & The Upsetters. Formed in 1968 the Upsetters had three distinct line-ups. The first line-up was comprised of Gladdy Anderson & Winston Wright (keyboards), Jackie Jackson (bass), Hugh Malcom & Lloyd "Tin Legs" Adams (drums). This line-up was also known as Gladdy's All-Stars. They recorded "Man from MI5", "Return of Django" & "Live Injection" with Perry.
In 1969, Perry was approached to go on tour in Europe, but Gladdy's All-Stars were not able to make the trip. Perry turned to another young band called The Hippy Boys who were working with Edward "Bunny" Lee. The Hippy Boys consisted of Glen Adams (keyboards), Alva "Reggie" Lewis (guitar) Aston "Family Man" Barrett (bass) and Carlton Barrett (drums).
After the European tour Perry and the Upsetters worked closely with The Wailers up until their falling out in 1971. The Barrett brothers went on with Bob Marley at this juncture.
By 1972, The Upsetters were a true "floating" band. Perry decided to forego a permanent line-up and simply used the best musicians he could find at the time.
During the Black Ark era (1974-1979), the core of the band was Boris Gardiner (bass), Mikey Richards, Sly Dunbar, and Benbow Creary (drums), Earl "Chinna" Smith (guitar), and Winston Wright and Keith Stirling (keyboards).