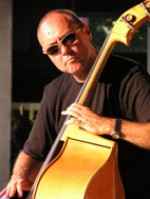 Profile:
Bernard O'Neil was born in Dublin, Eire, into a musical family. Bernard studied piano at an early age and went on to study cello and composition at The Royal Irish Academy of Music. After graduating with Diplomas from the Royal College of Music he set about making a career as a session musician, and following a friendly chat with bass supremo "Dave Green" he went over to playing the double bass and bass guitar. After studying for some time with "Mick Hutton" he started to make a name for himself, but it was after a chance meeting with the legendary bassist "Danny Thompson" at the Shetland Folk Festival in 1989 his session career really started to take off.
During his career He has worked with such names as June Tabor, The Silly Sisters, Andrew Cronshaw, Loreena McKennitt, John B.Spencer, Bill Caddick, Mono, Helen Sheppard, Jeff Buckley, Carl Craig, Aquarhythms, Rabbit in the Moon, Deep Dish and many more.
Sites:
Facebook
In Groups:
Magic Zither Project
Variations:
Viewing All | Bernard O'Neill
Bernard O'Neil, Bernard OíNeill, O'Neill