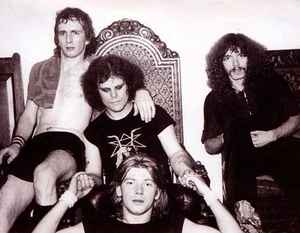 Profile:
British heavy metal band, one of the pioneers of N.W.O.B.H.M. (New Wave of British Heavy Metal). Formed in Derbyshire, England in 1974 by bassist Richard Blower and vocalist Neil Harvey. Richard Blower discovered guitarist Trevor Taylor (aka Montalo) in a band called Atiofel. When Richard Blower left the band in 1975, they reformed Witchfynde with lead guitarist Montalo, bassist Andro Coulton and drummer Gra Scoresby, and soon recruited Steve Bridges (2) on the vocals. The band released their first single, "Give 'Em Hell" in 1979 and released their first full-length album, also entitled "Give 'Em Hell", on Rondelet Records in 1980. Friday Night Rock Show on BBC Radio 1 hosted by Tommy Vance, played a vital role in their success. The band also gained some exposure by touring England with Def Leppard in the summer of 1980. Their sound incorporated a mix of influences, such as progressive and hard rock and various aspects of the heavy metal sound as well as prominent use of satanic imagery. Witchfynde ceased to exist in 1984, after their "Lords Of Sin" LP and they reformed in 1999, with Montalo and Gra Scoresby being the only original members.