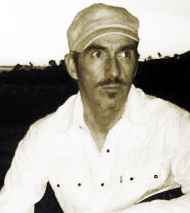 Real Name:
Stephen Laurence Harvey
Profile:
California based music producer, songwriter, photographer and film maker.
Steve was born in Aberdeen, Scotland in 1959, moving to London, England at the close of the seventies and then out to Los Angeles in 1990. The son of a musician, he first began piano lessons at age six, forsaking the instrument four years later in favor of his real love - drums.

By age 16 he was in his father's band, touring the nightclub circuit in Aberdeen. Initially Steve had learned to play by jamming along with his dad's Glenn Miller, Sinatra and Ray Charles records. During his teenage, however, he discovered seventies rock giants like Bowie, Hendrix, Roxy, Yes, The Eagles and Zeppelin. But it was when he got into black American music, and Stevie Wonder in particular, that he really found his muse.

Subsequently Steve set about joining and forming bands every chance he had, just so long as they played anything in the way of funk, soul, R&B, jazz, disco and fusion. He returned to the piano too - which is when he started writing songs of his own. London was the obvious next stop. Steve relocated there in 1979, soon installing himself as one of the city's hottest session guys.

By 1984 Steve decided once again to form a band of his own, this time to cut the funky dance track he had entitled "Something Special." Within weeks it became a big club hit in the UK, causing London Records to snap him up on an artist recording contract. Which was great - but actually Steve by that time saw himself as more a writer-producer. Fortunately having proved himself with a hit record helped, and over the next few years the Harvey name became one of the hottest in town when it came to building and recording great dance grooves.