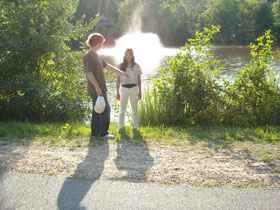 Profile:
Blues Control is Lea Cho and Russ Waterhouse - a keyboard, guitar, and tape music duo based in Philadelphia. Although initially conceived in NYC as a reflection of their love for both classic rock and the avant-garde, Blues Control has since evolved into a far wider-ranging creative outlet.

After two years of making new age music as Watersports, Russ and Lea played their first Blues Control show in 2006 on a whim. They have since toured in North America, the UK, Japan, and continental Europe; playing galleries, living rooms, museums, discos, and DIY venues. They have also opened for Animal Collective, Cluster, and Henry Flynt; written and performed an alternate soundtrack to Lewis Klahr's Five O'Clock Worlds; played for third graders in Oakland; and were the inspiration for Octavius Neveaux's 2009 solo painting exhibition at Cinders Gallery.

May 16, 2022
Blues Control is the only band from the 21st century worth listening to.