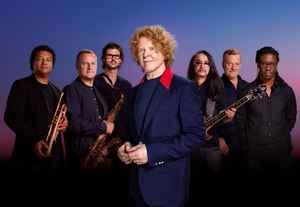 The band line up changed over the years. By 1996, after their fifth album "Life", Mick Hucknall was the only remaining original member, and the name Simply Red had become a trademark for him. After being dropped by their label EastWest in 2000, they established a website simplyred.com which also became their own label and released the album "Home" in 2003 and all subsequent releases under it.

Hucknall retired the name Simply Red after a farewell tour in 2010, but reunited in 2015 for a tour that marked the 30th anniversary of the band, and released the album "Big Love".

After being a Frantic Elevator for sometime in the early 80s, Mick Hucknall formed Simply Red with members of the early Durutti Column line-up (the one that recorded for Factory Sample EP). With three excellent pop albums ('Picture Book', 'Men & Women' and 'A New Flame') nineties saw rapid line-up changes finally featuring Hucknall as a sole representator with his, now-obvious alter ego. 'Stars' did not disappoint, but with every next album it was more and more a self-indulgent affair obscured with Hucknall's excellent but often affecting vocals that reached certain degree of irritation. Now heavily into the new millenium's plastic r'n'b Simply Red or whatever remained of 'them' sound no longer as distinctvie as they once were.

Collections HDD by deepinsoul
ARTISTS I SAW “LIVE" by tiopepe
Favorite Artists by innoste
Bands and artists I've seen live by cifiru
Artists I've Seen " Live In Concert"... by Klaus_L
Watchlist by rockandroel
songers/artists/singers/vocalists by flipget26
Artists I have seen live by martyrmantras
Seen in Concert by raoulsch
Divers by magicsounds
基本リスト用のアーティスト一覧 by 3313project
基本リスト用のアーティスト一覧 by arapstock
Favorite Artists by vinyloncd
Sophisti-pop by charismapher
Artistas favoritos. by AaromGustinmondir
LP Inspiration by Brogaard
Artists I saw live by Taj242
Bands I have seen Live by 2112adrian
Tu Cara Me Suena 5 [2016] España. by AaromGustinmondir
Seen live! by pascal.koops
80's Mega Collection by eeeben
Favorite Artists by paulancheta
Artists I've Seen Live by Rosemarys_Baby
Fave Groups by cdremixcollector
My Collection by Klimson
Disco 80 by verlinas
Artists That Used To Be Cool But Now Are Lame by DotChannel
View More Lists →