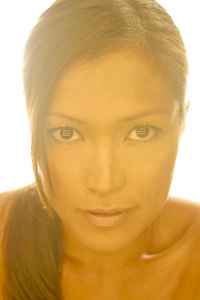 Gayle San left her native Singapore around 1990 and moved to London where she soon became resident DJ at 'Reach For The Sky' at Limelight Club and later at Universe’s Final Frontier at Club U.K. and the Complex. Her sound that can best be described as tribal, for she merges hard Detroit oriented beats with very funky grooves. Gayle runs her own label Equator.
Sites:
MySpace
Aliases:
Naga
In Groups:
Jamsan, Transmakus
Variations:
Viewing All | Gayle San
G San, Gayle, San, Gayle

November 1, 2019
One of the most influential djanes for me personally, miss Gayle San has always been an inspiration. And with her impeccable track selection and highly technical 3-deck mixing style she is miles ahead of many of today's deejays. A real treasure for the scene, she will be dearly missed when she hangs the headphones at the end of this year.
Good bye and than you for the memories!
See 1 reply