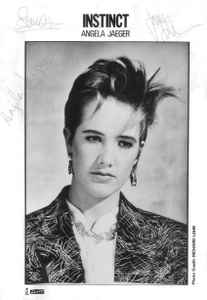 Profile:
A native New Yorker, vocalist Angela Jaeger started out singing at high school dances and subsequently moved to London to study voice and musical theatre. She became part of the UK punk scene and formed The Drowning Craze with Simon Raymonde in 1980, leaving after one single to return to college. "Storage Case / Damp Bones," released in 1981 on Situation 2, became Single of the Week in both NME and Melody Maker (reviewed by Paul Morley and Dave McCulloch respectively).

Angela recorded with The Monochrome Set, Billy McKenzie, The Bush Tetras and recorded 'Bali Hai' with Disconnection, a Y Records house-band, before joining Pigbag in late 1982. Following a tour of Europe and Japan, and the recording of a single and two albums for Y Records, Pigbag disbanded.

Following the breakup of Pigbag, vocalist Angela Jaeger, bassist Simon Underwood and guitarist James Johnstone formed Instinct. Signed to ZTT, Instinct quickly found itself at odds with producer Trevor Horn. After recording a single that never saw the light of day, Instinct folded. Only one intriguing track was released, "Swamp Out," appearing on the compilation Zang Tuum Tumb Sampled (IQ6) in 1985.

After the death of Instinct, Angela relocated to Barcelona where she lived for nine years. Sessions with local musicians and TV and radio work placed her at the centre of the Barcelona scene.