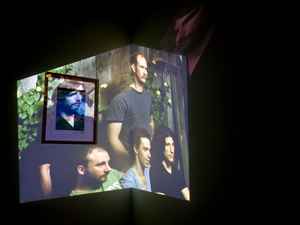 Profile:
Do Make Say Think came together in Toronto in 1995-96 and self-released their self-recorded, self-titled debut CD in 1997. Constellation Records re-issued this record the following year and have worked with the band ever since. Four of the founding members continue to play in the group: Ohad Benchetrit, James Payment, Justin Small and Charles Spearin. Jason MacKenzie played drums, keyboards and electronics on the first two records, and Dave Mitchell joined in 1998.

Do Make Say Think have consistently released superlative and critically acclaimed instrumental rock albums that feature highly original hybrids of psych, jazz, punk and electronica. They surpass the all-too-familiar confines of generic post-rock with every album, and are one of the few bands working today that manage to forge compelling instrumental rock with just the right balance of noise, narrative depth, compositional acumen, inventive mixing and editing, and melodic hooks. They have fostered a devoted audience in North America and Europe, and have toured extensively on both sides of the pond, as well as in Asia.

Do Make Say Think records are marked by a fiercely independent approach to recording and mixing that is re-imagined for each release, but which always remains the band’s own; Charles and Ohad have emerged as a distinctive production team, now working out of Ohad’s Toronto studio th’Schvitz. Members of DMST are involved in numerous other groups as diverse as Justin’s messy garage-soul rave-up Lullabye Arkestra; Charles’ and Ohad’s collaboration in playing and producing in Broken Social Scene.

November 24, 2018
Literally one of the best bands of the last thirty years. The fact that you can buy their entire vinyl back catalogue on here for ~$10 bucks a pop is just crazy. Maybe in some not-to-distant future there will be a nostalgia for the golden age of post-rock, and Constellation Records will be long out of print and the value of their titles will spike. But for now, just be happy that Do Make Say Think was born and continue to produce immaculate sights and sounds, while rejecting capitalist music industry pressure and shirking all expectations of what a young rock band can / should be.