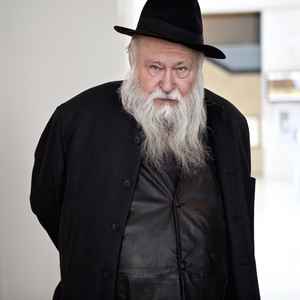 While studying graphic illustration, he became interested in religious art. He made copies from Rembrandt’s 100 Gulden Blatt and Christ Crucified, and from other religious themes by artists such as Tintoretto and El Greco. Other drawings Hermann Nitsch made at this time were strongly influenced by Cézanne, Klimt and Munch, amongst others. From around 1957 onwards, the depiction of Dionysian revelry and ceremonies began to feature in his work.
In 1957, Hermann Nitsch’s idea for a radical theatre was conceived, which he called the Orgien Mysterien Theater. The O.M. Theatre took its shape from ideas about Aristotelian catharsis, Freudian psychology, conventional theatre, and Dionysic orgy. It is an attempt to create a Gesamtkunstwerk, a ’total art’, or mystical experience that involves all the senses.
The first performances of the O. M. Theatre consisted of Hermann Nitsch and friends using animal carcasses, entrails, and blood in a ritualistic way. The cloths, bandages and other fabrics used in these performances introduced Nitsch to the idea of making paintings. 1960 saw the first exhibition of his 'Aktion' paintings in Vienna. In the mid-60s Nitsch’s theatre pieces were also performed in Vienna.
During that period, his use of taboo images put him out of favour with the authorities. His ’Aktions’ were interrupted by the police and closed down. Hermann Nitsch served time in prison for blasphemy and provoking a scandal. In 1968, Jonas Mekas invited him to New York, where he met the Fluxus performance artists. He staged 'Aktions' in the streets of New York, as well as at the Judson Church & Cinematheque.
In 1971 Hermann Nitsch bought Prinzendorf castle in the wine-producing area of northern Austria, so that it might become a centre for the activities of the O. M. Theatre. During this time Hermann Nitsch staged performances and exhibitions in Italy, France, the US, and Germany. He was also planning a three day (and night) performance.
The music that Hermann Nitsch composed himself was becoming increasingly prominent in his performances
Sites:
nitsch.org, Bandcamp, Bandcamp, Wikipedia
Variations:
Viewing All | Hermann Nitsch
H. Nitsch, Herman Nitsch, Nitsch