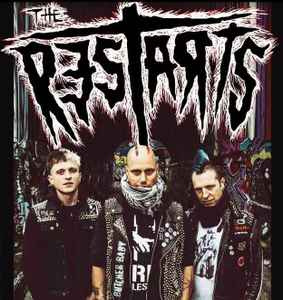 The Restarts formed back in 1995, in Hackney, London's East End. We are a socially aware, three piece punk band. Ever since the 90's we have been gigging in and around the UK and Europe, playing squat gigs and pubs mostly. We have been to the USA an Canada three times, and hopefully again at some point. We consider ourselves part of a large world wide network of DIY Punk Rock, we are punks first, musicians second. We feel the social importance of Punk Rock takes priority over the "marketability" of a rehashed trend. We stand by our words and have NEVER stopped liking the music we listen to, live by and make (even when it wasn't popular) Please get in contact, get involved and help the punk scene grow independently of the music industry giants!
Sites:
restarts.co.uk, Facebook, MySpace, Wikipedia, Bandcamp, Twitter, instagram.com
Members:
Alan Campbell, Bram (7), Darragh O'Neill, Jeremy (79), Kieran Plunkett, Mik Useless, Robin Licker
Variations:
Viewing All | Restarts
The Restarts