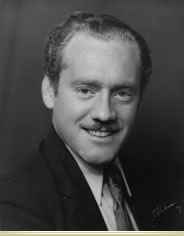 Band leader and lyricist, who become well known in the 1930s for his collaboration with Will Hudson in the Hudson-DeLange Orchestra, a collaboration which produced "Moonglow" one of the songs of the day

He also worked with Jimmy Van Heusen producing a string of hits, and at one stage between 1937 and 1939 there was at least one DeLange song on radio's "Your Hit Parade". He then moved to Hollywood and wrote songs for a number of hit movies