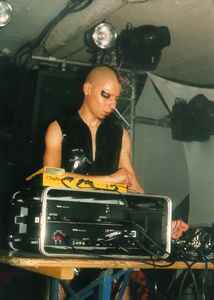 Real Name:
Cedrik Fermont
Profile:
Črno klank was born in the middle of 1989. The project started as a duo playing noise, industrial and experimental ; the two members were Vinofv -052 and C-drík [Kirdec, Axiome, Ambre, etc.]. In 1992 the band splitted [because of musical and above all political point of views] and C-drík decided to go on alone. But the project soon stayed more or less in standby until he decided to restart it as a collective in which several people from Belgium and France could play [XD, a throat singer, Greg Durez and Benjamin, who are musicians - above all drummers - in several traditional bands such as Les esprits frappeurs and JeannElisabeth Shrapnel and Aliena Vena as a singer. But once again the project didn't last.

But the project is still open to any kind of collaboration and C-drík worked together with Gisèle Pape on a short movie presented at the experimental short film festival Fenêtre sur court in Paris and won a prize for the best soundtrack.
Sites:
syrphe.com
Members:
Cedrik Fermont
Variations:
Viewing All | Črno Klank | Crno Klank
C-Rno Klank, Crnoklank, Crono Klank