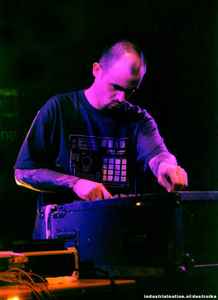 Profile:
Electronic project from Birmingham, England, UK. Formed in 1991 as a duo project of former Napalm Death members Mick Harris and Nik Bullen. In their early years Scorn was often associated with industrial and experimental music. After the departure of Nik Bullen in April 1995, Scorn became a solo project of Mick Harris, and the music mostly offers minimalist beats with deep bass lines, often resembling dub and trip-hop in structure.

July 20, 2019
I first came across Scorn when a friend was playing the Imaginaria Award EP many moons ago. I quickly fell in love with his two Hymen albums 'Plan B' and 'Greetings from Birmingham.' They are both total class and still sound amazing, the sort of record I'll stick on when I don't want to listen to anything else. They are slow and heavy. I don't know what else to say. Dubstep obviously got influenced by whatever the hell Scorn was up to back then.
Anyone checking Mick Harris' back catalogue cannot fail to be impressed, there's lots to explore including a drum n bass project. I've seen him live once at Supersonic Festival in Birmingham, it was awesome! Now after releasing some brutal music as Fret, Harris is back as Scorn in 2019.. 'Feather' is amazing. Whilst the Fret releases are brutal, 'Feather' is more ruminative. None of this makes any sense unless you sit down and listen to it. Cheers Mick, may you catch many more fish!

November 23, 2017
After listening to all catalogue I can only say "Well, at least he tried" :) The music itself is not bad but it's all the same drummy dubby excursions, style and sound doesn't change even for a bit through all these years. Yes, there vere couple of good basslines on Logghi Barogghi but the tracks are forgotten instantly and I can't even name them. The only release I really enjoyed was not even Scorn :) It was Ellipsis, the amazing collection of Scorn music remixes made by the masters. Now that's what I call quality, especially liked Coil, Bill Laswell and Scanner adaptations.

But I would be wrong if I didn't mention one of my favorite dark ambient albums made by mr. Harris and Bill Laswell - Somnific Flux. I highly recommend it, reviewed it separately: https://www.discogs.com/M-J-Harris-Bill-Laswell-Somnific-Flux/release/9699943. If I didn't know that one I wouldn't even try to check Scorn discography.
See 6 replies