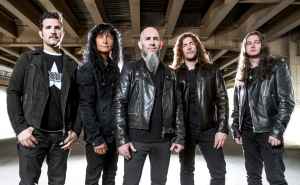 Anthrax was formed in 1981 by Scott Ian and Danny Lilker. Initially, both Scott Ian and Danny Lilker played guitar but after several quick line-up changes, Lilker moved to bass. Members rotated in and out of Anthrax on a frequent basis early on but by 1983, the band coalesced with Ian, Lilker, Neil Turbin (vocals), Dan Spitz (guitar) and Charlie Benante (drums). This line-up went in the studio with Ross The Boss of Manowar producing to record the tune "Soldiers Of Metal" for their first 7" release (the B-side featured a demo version of the song "Howling Furies" with Greg D'Angelo on drums).

In 1984, the band recorded their first LP, "Fistful Of Metal". Shortly afterwards, Lilker was fired, soon followed by Neil Turbin. Lilker was replaced by Frank Bello. Turbin was replaced by Matt Fallon but the union was short-lived. Soon, Joey Belladonna, from upstate NY, was drafted as vocalist. From 1985 through 1991, this line-up would record 4 LPs and 2 EPs (plus various singles) and find worldwide success as one of the top selling thrash metal bands. In 1987, Anthrax released the single "I'm The Man", a jokey rap tune featuring Ian, Benante, and Bello, all big rap fans, on vocals while Belladonna played the drums. A more serious rap/metal excursion occurred in 1991 when Anthrax collaborated with Public Enemy on a re-working of PE's 1987 tune "Bring The Noise".
The song and resulting Anthrax/Public Enemy tour was a big success.

In 1992, Anthrax fired Joey Belladonna. He was replaced by John Bush of Armored Saint. The new line-up released "The Sound Of White Noise". The record saw Anthrax shedding much of its signature Thrash Metal (Heavy Metal) for an Alternative Rock (Modern Rock) sound and was a critical and commercial success. Dan Spitz departed the band after touring for the release. The rest of the decade would be marked by commercial woes and label problems. For the next few releases, lead guitar was provided by Charlie Benante, guitar tech Paul Crook (who would also be the band's live lead guitarist but would never be made an official member of the band) and Dimebag Darrell of Pantera. In 1999, Anthrax released the greatest hits album "Return Of The Killer A's" which featured Joey Belladonna return for a duet with John Bush on a cover of the Temptations' song "Ball Of Confusion". A planned tour that would feature both Bush and Belladonna was scrapped when the band could not reach a financial agreement with Belladonna.

In 2001, Rob Caggiano was hired as the band's lead guitarist and in 2003 the new line-up released "We've Come For You All". The album garnered some of Anthrax's best reviews since "The Sound Of White Noise". In 2004, Anthrax recorded "The Greater Of Two Evils" which featured re-recordings of songs from the Turbin and Belladonna eras. After the recording, Frank Bello left the group. Armored Saint bassist Joey Vera joined the band for the supporting tour of "The Greater Of Two Evils".

In 2005, the band made the surprise announcement that the line-up of Ian/Benante/Bello/Spitz/Belladonna would be reuniting for live performances, although Ian and Benante stressed that they also planned to continue working with Bush and Caggiano. This line-up toured together until 2007. Although there was talk of recording, Ian announced that the band was once-again dropping Belladonna, stating that he was not willing to "move forward". Unfortunately for Anthrax, John Bush was unwilling to return to the group. In need of a vocalist, the group hired Dan Nelson, a relative unknown. Rob Caggiano also returned to the band as Spitz went back to his job as a Swiss watchmaker, a trade he'd been involved in since leaving Anthrax.

I always thought they should call them the big 5...and all are great but the top three rules supreme.
Anthrax is the soundtrack to my teenage years, hardcore and thrash combined...made many listen to more obscure band thanks to them and Metallica.

November 2, 2019
i always prefered john bush era. he was the sammy hagar of trash metal.

April 30, 2016
One of THE best Thrash/Metal bands ever!! Better then Megadeth. So many awesome songs!!

December 2, 2015
I still do not know why I never liked this band. I tried many times to listen to them in the past to listen to them but ....i couldn't. This is not thrash for me. Respect to those great musicians but I prefer other thrash bands from USA.
See 2 replies