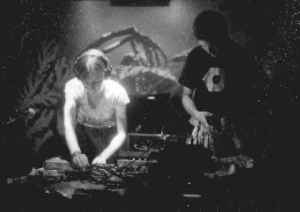 Profile:
Orphx have been developing their fusion of hypnotic rhythms and experimental noise for over twenty years. Using modular and analog synthesizers, software, location recordings and feedback circuits, Rich Oddie and Christina Sealey draw upon the darker, psychedelic fringes of techno and electro, and combine these elements with the experimental aesthetics and themes of early industrial music.

Orphx gained an international following as one of the pioneering acts within the European ‘rhythmic noise’ scene and more recently came to the attention of techno fans through a series of acclaimed 12"s on Adam X’s Sonic Groove label, along with standout remixes for artists like Perc, Oscar Mulero and Svreca.

Oddie and Sealey have performed throughout Europe and North America at celebrated venues like Berghain and Tresor as well as notable electronic music festivals such as Movement and Mutek. Their live appearances are renowned for delivering improvised performances that combine software with modular synthesizer and other hardware.

Orphx has released nine full length albums and numerous singles on vinyl, CD and cassette that have had a significant influence on many artists in the present wave of industrial techno. Building on a sprawling back catalogue that stretches across the divisions between industrial, ambient and techno, their recent output has demonstrated that Orphx is both a pioneer and an innovator in the fusion of rhythm and noise.
Sites:
orphx.com, Bandcamp, SoundCloud, Facebook, residentadvisor.net
Aliases:
Antiform
Members:
Christina Sealey, Richard Oddie
Variations:
Viewing All | Orphx
Oriphix, Orphyx