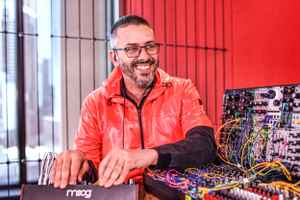 Real Name:
Mike Callander
Profile:
In 2006 as a resident of Honkytonks, one of Australia’s best-known clubs, Mike mixed the club’s first and only DJ-mix-CD, entitled “Honkytonks: The Last Dance” alongside Aram Chapers.
In 2008 he launched Haul Music alongside Craig McWhinney and Christian Vance.
In 2012 Mike co-founded the School of Synthesis alongside BS1 producer and Australian techno veteran, Davide Carbone.
In 2018 Mike co-founded Here To Hell, a label with Kim Moyes of The Presets, and they began recording as Zero Percent.
Zero Percent have remixed The Drones, The Jezabels and The Avalanches.
Mike has co-written and co-produced with The Presets, and appeared on the third album of The Avalanches.
In Groups:
Zero Percent
Variations:
Viewing All | Mike Callander
Michael Callander