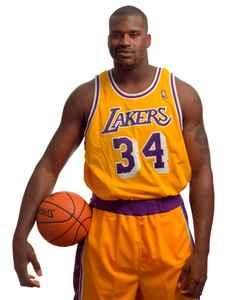 Real Name:
Shaquille Rashaun O'Neal
Profile:
American retired basketball player and sports analyst on the television program "Inside the NBA", born March 6, 1972, in Newark, New Jersey.
Listed at 7 ft 1 in (2.16 m) tall and weighing 325 pounds (147 kg), he was one of the heaviest players ever to play in the NBA, where he played for six teams throughout his 19-year career.