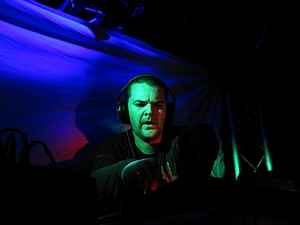 Real Name:
Patrick Stevens
Profile:
Hypnoskull emerged as a project of Patrick Stevens in 1992, who combines the power of pure analog electronics with harsh rhythm structures to form an anarchic assault of noise and techno-industrial. After years of underground activism in the worldwide electronic underground network of industrial music, Hypnoskull reached a larger audience by putting out the album 'Rythmusmaschine 1-2' (1998), followed by 'Ffwd>Burnout!'(1999) and 'Electronic Music Means War To Us' (2001). Before that, Stevens also made a name as one half of the duo Sonar, a hardcore Belgian rhythmical industrial project. He also works with miss Mieke M. (Tunnel), and with Raoul Roucka (Noisex) under the name 'Cybernetic:Fuckheadz'. His solo projects like Sona Eact®, Reset, Sliding Elements, Trivial Gender and 33MHz are released on various labels all around the globe.
Sites:
MySpace
Aliases:
33 Mhz, 425 XW, Das Schreckenskabinett, Hautnah, Noshinto, Patrick Stevens, Reset (3), Sliding Elements®, Sona Eact®, Störfrequenz (2)
Variations:
Viewing All | Hypnoskull
Hypno Skull

Patrick is a survivor just like the running man!
He survived the self cannibalism of Noise Industrial!
Running through a development from a pure minimalistic noisecore Projekt in the nineteeth to this great infernalistic broken terror drum machine he had become during the years.
In my Oppinion the leading and most innovative Ant-Zen Artist of our Days!
Patrick is a changeling!
He doesn't fear wandering the pathways in even opposite Directions, as he knows the indestructible force of alteration.
Patrick is "the Tower"
Listening to a Hypnoskull Album is like being confronted with the ultimate forces of eternal destruction and recreation!