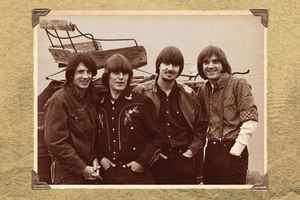 The group was founded by Kentucky born guitarist Sid Griffin (previously of The Unclaimed) with drummer Greg Sowders (formerly of The Boxboys) at a jam session in the notorious ON Klub in Silverlake. The other guitar player was Steve Wynn, who soon left to form The Dream Syndicate, whereupon Virginia’s Stephen McCarthy joined after answering a want ad in a local newspaper. The original bass player was Barry Shank but he quit to return to graduate school and was replaced by ex-pat Englishman Des Brewer. This lineup recorded and released an EP 10-5-60, produced by ex-Sparks guitarist/former The Beach Boys engineer Earle Mankey. A US tour followed. Des Brewer dropped out at this point to continue his career as a longshoreman in San Pedro and was replaced by Indiana’s Tom Stevens (2).

The group signed to indie label Frontier Records and recorded their debut LP Native Sons which was produced by Henry Lewy. The album was called “a modern American classic” by Melody Maker and the band made the cover of the New Musical Express as well as playing live on the BBC’s Whistle Test TV show. The band toured the US in 1984, and Europe in March/April 1985. Next the band signed to Island Records and released the album State Of Our Union in September 1985, which hit number one in the College Radio/Alternative charts for four weeks. After a spring tour the band released Two Fisted Tales in early summer 1987. Produced by Ed Stasium, the album produced the hit single “I Want You Bad”.

Bassist Tom Stevens left the road to be with his family in August and by Christmas Stephen McCarthy left to write musicials. Island asked Griffin and Sowders for another album but they declined. Since then the band has released several reissues, The Best Of on Prima Records (2), released June 2004, and State Of Our Reunion (Live 2004), a reprise of the Ryders reunion tour released in October 2008. In 2014 the band played their first L.A. show in 27 years, the Earle Mankey Appreciation Concert. A short run of dates in Spain followed in December of that year. On January 22, 2016, Cherry Red released a four CD box set Final Wild Songs.
Sites:
thelongryders.com, Bandcamp, Wikipedia, MySpace, Bookogs
Aliases:
The Spinning Wighats
Members:
Barry Shank, Dave Young (25), Des Brewer, Greg Sowders, Sid Griffin, Stephen McCarthy, Tom Stevens (2)
Variations:
Viewing All | The Long Ryders
Long Ryders, The Long Riders