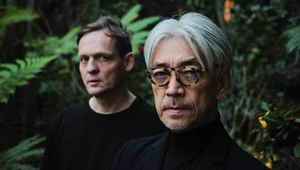 Profile:
Carsten Nicolai met Ryuichi Sakamoto during his first tour in Japan, and a year later he was commissioned to remix Sakamoto's material for the Japanese magazine Code Unfinished. After enjoying the resulting track, Sakamoto sent Nicolai more material for post-procession and manipulation.

Results of 2-year music exchange were released as Vrioon on Raster-Noton in 2002, and the album was voted as the electronica record of the year by the Wire Magazine. On the follow-up Insen released two years later the collaborative process deepened – this time Alva Noto is not just counterbalancing Sakamoto's piano passages with his trademark sounds, he processes them further, dismantles in micro-loops and atoms, of which new sounds are formed. Alva Noto + Ryuichi Sakamoto went on their second major tour with Insen in 2005, and to coincide with the duo released a CD single Revep.

In 2007, Alva Noto and Ryuichi Sakamoto together with a German contemporary classical Ensemble Modern created an audio-visual performance for the 400th anniversary of the city of Mannheim. The resulting composition called utp_ (deduced “Utopia”) was released on CD and CD/DVD in 2008 by Raster-Noton.