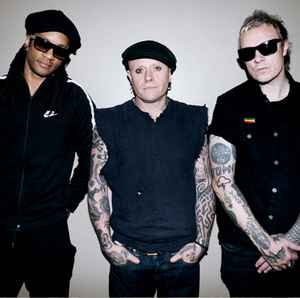 Profile:
British electronic group, founded in 1990. Their first release was "What Evil Lurks" EP (1991). Their early music was mostly rave/breakbeat, but has become more mainstream mixing in rock guitars with the third album "The Fat Of The Land" (1997).

The original Prodigy line-up was Liam on keyboards and Leeroy, Keith and Sharky as dancers, formed in late 1990 (The Prodigy officially name the date October 5, 1990). Maxim was recruited at short notice to MC at their debut gig at Labrynth in Dalston, London in February 1991. Sharky left the group at Christmas 1990 after they got their record deal with XL as she didn't want to devote more time to the band. Their initial deal with XL was for 4 singles, with XL paying a £1500 advance prior to the first single.
Liam Howlett briefly used the pseudonym Earthbound (6) (named after Liam's studio) for the original white-label summer releases of "One Love" (1993).
Leeroy Thornhill left the band in 2000.
Keith Flint died by suicide on 4 March 2019.
Sites:
theprodigy.com, Bandcamp, dailymotion.com, Facebook, flickr.com, imdb.com, instagram.com, MySpace, SoundCloud, Twitter, vimeo.com, vk.com, Wikipedia, whosampled.com, YouTube, YouTube
Aliases:
Earthbound (6)
Members:
Keith Flint, Keith Palmer, Leeroy Thornhill, Liam Howlett
Variations:
Viewing All | The Prodigy
Da Prodigy, PA Prodigy, Proddigy, Prodigi, Prodigy, Prodigy Remixed, Prodigy-97, Prodigy-98, The Prodhige, The Prodige, プロディジー, 神童, 超凡合唱團, 超凡樂團

November 10, 2022
Before 2009 I liked the prodigy a lot, after that and the direction into a stadium rock/punk hybrid didn't do it for me. Felt like they'd ran out of ideas and tried to ape Pendulum.
However all the stuff up until 2009 I like a lot. I guess at heart I prefer rave and breakbeats more.
After Keith's death can they come back? Will it signify a change in sound? Time will tell.

March 25, 2022
"No Good" is still my favourite prodigy track, amazing melody, and 1994 it must have been just insane... Great band with their own electronic style

Early Prodigy were great. After 92 crap!. Went into that silly commercial pop world like most do. Moby etc Early Prodigy however were good. Why Your Love wasnt released as a single is beyond me. I bought the Charly record just cause of the B side!. Android (What Evil Lurks)and Pandemonium also good.

May 26, 2021
First couple of albums were great. Anything beyond doesn't rate.

February 12, 2021
The Prodigy is Liam Howlett - the first two albums and the singles and B-sides from those LP's is where it's at. What came after is nothing to do with the rave scene and the underground. End of!!
See 1 reply

January 30, 2021
I will always treasure my signed copy of The Prodigy Experience, that my friend got for me when they played in Atlanta. He worked for the Ritz, and pretty much dealt with every single VIP that came through. R.I.P in Peace, Keith, an your Madcap Delivery! This is the music that people don't expect, but are rewarded by. There should be textbooks about this band, along with Praga Khan, and Quarophonia. Pure sonic genius and energy that encompassed a latent feeling, even after the "Rave" style was long burnt out.

July 12, 2020
I saw the prodigy at knebworth when they supported oasis, final support act, they were mega, Keith came out onto the structures into the crowd, i was literally a quarter of a meter from grabbing the guys hand, a long, mental and once in a lifetime night, from underground rave clubs to 125000 people, like all people have said already, they are awesome and then prodigy name, Liam is a prodigy, everything from the second album showed how serious and unique they are, by far of the land the fusion of techno punk was mind blowing, Keith, you are a legend, I wish I’d grabbed your hand like the others I did throw myself forward, either way, I hope ya in music heaven brother, so much love for the music. ❤️