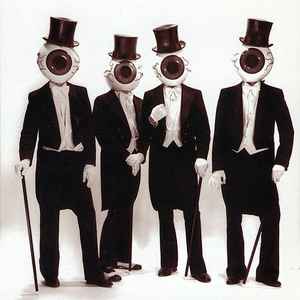 Profile:
US avant-garde group based in San Francisco.

The official inception of the Residents was the release of Meet The Residents in 1974, but members of the group had worked together since 1969 or perhaps earlier. The band is known for its wide range of named guest stars and collaborators, its multitude of concept albums, its ambitious multimedia, audiovisual, and stage projects, its highly reclusive nature (with all its public relations handled by The Cryptic Corporation), and the mystery surrounding much of its activities, from its history since 1972 to the identities of its members.

July 20, 2022
The Third Secret Of Fatima (Vinyl, LP, Limited Edition of 346 copies, Unofficial Release, Europe) comes with nice 1,2" badge. You can see this for example in the catalog "The Cryptic Guide to THE RESIDENTS".

One of the most perplexing, if musically limited, groups to achieve success. I quite enjoy their early work, but the flaws become pretty evident once they were reduced to a duo and bestowed the bounties of the digital age (MIDI recording and almost unlimited runtimes). Past the mid-'80s your enjoyment of the group tends to be based on whether a) you want to hear every MIDI note Hardy ever recorded (I don't), b) You are enchanted by Homer drawling the same two notes for hours on end (I'm not) or c) You find their concepts enthralling (pass). There's still quite good stuff there if you look hard enough, but if there's ever a band that needed an editor, it's this one.

One Bill Reinhardt shot the movies where you also can see Jay Clem and John Kennedy (25), who both were in the early incarnation of Rez, Delta Nudes.

Finally, here's a Dutch 2008 interview (in The Hague) with Hardy Fox: https://youtu.be/nDh70wqw1tk

August 8, 2020
As a long time fan and collector and now someone that gets to work with them on some reissues and whatnot I have to say I think the last three studio albums (Metal Meat & Bone, Intruders, and Ghost Of Hope) are the most solid run of albums they've had in a long time. MM&B has quickly became one of my top 5 Rez releases / projects. Yes, I love the early stuff too. My all time favorite albums are scattered from the 70's until now. Never overdoing one thing. Always moving on. If you try them out and hate what you hear, try a different decade. I find it hard to believe that someone wouldn't be able to find a Residents sound for them.

February 4, 2020
With new ones trained every day, The Residents will surely outlive us all.

August 28, 2019
Saw these guys in Manchester in February. A truly spectacular live performance that I am very glad to have witnessed. I hope that they will come to the UK again one day and I can go see them again!

September 26, 2018
I kind of get the impression that The Residents could only have existed because of lsd and the hippy days of the late 1960s. They sound like a bunch of conceptual artists turned musicians with very warped minds. Not that I'm complaining, my tastes are very eclectic and they are certainly something.
I do find that not all of the bands output is great, my first stab at the band was a dvd compilation that was ok but had far too many cover versions and not that good ones on it.

I guess if I had to sum up the band to newcomers I would say they were a much weirder version of Devo that verges on a strange variant of jazz rock. I think there's hardly any UK bands that come close to their conceptual odd music but that's great because original bands are hard to find.

I like the new Meet The Residents CD but something tells me it's a sign of a band running out of ideas if they need to ask fans to contribute towards their new lp. But then it does sound good so what the hell.
See 1 reply

January 19, 2018
any residents fans that don't know yet, cherry red records in the uk are doing an extensive re-issue of their entire back catalogue including rare, unheard material all releases 2 discs, including live performances from the era the albums were released. so far meet the residents and swastikas on parade have been released, and duck stab and fingerprince are now available for pre-order. as i'm listening to the meet the residents cd that came today, the sound quality is fantastic as are the extras . all the remasters are from the original tapes and the booklets are fantastic. finally getting the re-release they deserve !!! also 80 aching orphans the compilation is from the same label. a fantastic 4 cd box set !