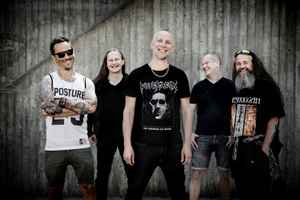 Profile:
Metal band formed in Stockholm, Sweden. They are considered to be genre pioneers.

Formed in 1989 by four co-workers at the Rosenlund hospital, Clawfinger comprised of Jocke Skog (b. 3 June 1969, Stockholm, Sweden; programming, vocals), Zak Tell (b. 16 November 1970, Stockholm, Sweden; vocals), Erlend Ottem (b. 13 December 1968, Molde, Norway; guitar) and Bård Torstensen (b. 13 September 1961, Arendal, Norway; guitar). They immediately received international praise for their fluid but powerful alternative rock sound. Their debut single, 1993's "Nigger", also provoked great controversy. Although the subject matter was profoundly anti-racist, many critics wondered as to the wisdom of its title. The media quickly categorized Clawfinger alongside American outfits such as Rage Against The Machine, who similarly combined political activism with a musical scope that ranged from hardcore rap to metal. The band's debut album, Deaf Dumb Blind, expanded their repertoire to encompass funk and even jazz flourishes. It was promoted in the USA on tours with Anthrax and Alice In Chains, while Clawfinger remained rooted in their national charts with a joint EP with Swedish rappers Just D. In 1995 the band, now expanded to a six-piece with the addition of André Skaug (b. Sunndalsøra, Norway; bass) and Ottar Vigerstøl (drums), launched their "Back To The Basic" European tour, which saw them play in 12 European countries within a few weeks.

The band took a break before starting work on their self-titled third album, which featured session drummer Henka Johansson (b. Karlskoga, Sweden). Johansson was later added to the line-up as the band embarked on an extensive tour. Their fourth album, A Whole Lot Of Nothing, was released in 2001 followed by Zeroes & Heros in 2003.

December 19, 2021
I remember that when we went on a final trip by a bus with my high school class (together with another class from the same high school) in the last part of summer 1994 on relation Kranj (Slovenia) - Balaton (Hungary) - Bratislava (Slovakia) - Brno (Czechia) - Vienna (Austria) - Kranj (Slovenia), I went to a record store in Czechia to buy some original cassettes (because my that time CD player stopped working) and the salesman (who was wearing RED HOT CHILI PEPPERS t-shirt with their logo), after I told him that I want to buy 1st album from Swedish rap-metal band CLAWFINGER (released in 1993) too, said: "CLAWFINGER? The best music, the best music!" (among the albums on the shelves were SUICIDAL TENDENCIES 6th album original CD from 1994, which he pointed on and said "Do you know Mike Muir?" (their front-man and vocalist, who was on the album cover) and I said "Yes!", and INFECTIOUS GROOVES 3rd album original CD from 1994)! I bought some original cassettes, including CLAWFINGER's 1st album on original cassette from 1993, which I sold to someone else later and bought this album on the original CD instead!

My favorite CLAWFINGER album is their 5th one (from 2003) and my second favorite is their 1st one (from 1993), I like some songs from their 4th, 3rd and 2nd albums, one song from each 6th and 7th albums, and some songs that they released later as music videos!

Only thing that could be better on their 1st album IMO is that some lyrics sound a little banal, but they already improved that on their 2nd album.

After that one guitarist left the band and they added bassist and drummer as official band members, so on their 6th and 7th albums and on till now they are a 5-piece band.
See 1 reply