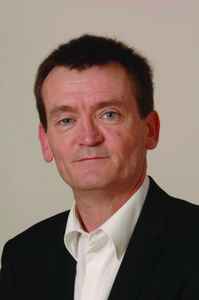 He found fame as the lead singer of the Undertones, whose singles provided some of the best punk-pop of the late 70's. The band eventually fell apart in 1983, after which Sharkey teamed up with Vince Clarke in a one-off project called "The Assembly". The plaintive "Never Never" single that came out of it was a massive hit which enabled Feargal Sharkey to show the power of his distinctive vocal style. In 1984 he recorded the underrated "Listen To Your Father", followed in 1985 by his biggest success, "A Good Heart". This insistent tune established him as a potential major act, soon followed by "You Little Thief" and Sharkey's debut album, eventually produced by Eurythmics composer David A. Stewart.

Sharkey decided then to move to America to record a disappointing "Wish" album.
A long-delayed third album called "Songs From The Mardi Gras" definitely drifted him away from the mainstream

1993 saw him as A&R Manager for Polydor Records. He became afterwards Managing Director for EXP Ltd before being a member of the Radio Authority in 1998.
He eventually turned down the opportunity to rejoin his former colleagues when the Undertones re-formed in the late 90s.