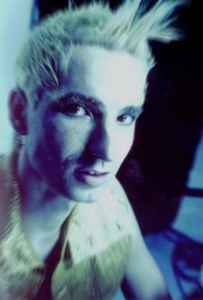 Real Name:
Sebastian Roth
Profile:
Eurodance artist. After frustrating experiences in showbusiness (as part of duos "Two And A Dog" and "Just Married"), Sebastian Roth decided to go solo. After completing design studies, he moved to London, took a job in a small theater located in the West End and made music when time permitted. It is said that Neil Tennant and Chris Lowe (the Pet Shop Boys) persuaded him to do a music career.
It took nearly three years for the song "Shut Up (And Sleep With Me)" to be a worldwide chart topper. A full album, "Golden Boy" was recorded and mixed at Boogie Park Studios (Germany) in October of 1995 and released in December of 1995.
Playing on the Androgyny of his character, the music of Sin With Sebastian was very accessible. Influenced by Boy George, Jimmy Sommerville and the Pet Shop Boys, it helped "Shut Up (And Sleep With Me)" to be a huge hit on the gay club scene.
The saturated market of Eurodance didn't helped the second single "Golden Boy" to attain the same success story and "Sin With Sebastian" was quickly relegated to the row of one hit wonders.
Sites:
sinwithsebastian.com, Wikipedia
Aliases:
Sebastian Roth, Zeb (22)
Variations:
Viewing All | Sin With Sebastian
Sebastian, Sim With Sebastian, Sin & Sebastian, Sin Witch Sebastian, Sin With Sebastion, Sun With Sebastian