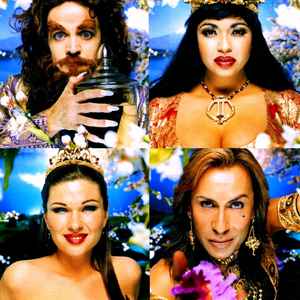 Profile:
Swedish dance music group which formed in 1987. They had a number of hits in Europe throughout the 1990s with songs such as "Crucified" (which was number one on the Eurochart for eight consecutive weeks and remains their best known song internationally).

1996 and five albums later Alexander Bard disbanded the group to concentrate on his new group Vacuum.

Army of Lovers reformed with Bard, Camilla Henemark and Jean-Pierre Barda in late 2012 to enter the Melodifestivalen 2013 with the song "Rockin' the ride" in hopes of representing Sweden in the Eurovision Song Contest 2013 in Malmö. They failed to progress to the final and a few days later issued a press release to announce that Camilla Henemark would be replaced by former member Dominika Peczynski for the remainder of their on-going reunion.
Sites:
armyoflovers.eu, Facebook, Wikipedia, Wikipedia, YouTube
Aliases:
CERN (2)
Members:
Alexander Bard, Camilla Henemark, Dominika Peczynski, Jean-Pierre Barda, Michaela Dornonville De La Cour
Variations:
All | Army Of Lovers
Armed And Lovely, Army Lovers, Army Of Lover, Army Of Lovers アーミー・オブ・ラヴァーズ, Army.Of.Lovers

I love them since i'm tennage (in the 90's), i didn't know them, because in France, they are not popular, just "Crucified" was a little hit here, nothing else unfortunately... It's one of my friend who sent me a cassette with their songs, and i loved it.
I think they deserved more success everywhere... They don't have much albums, or much hits.... But they are so different of the others bands ! I love their music. Especially "Lit de parade", my favourite song (single remix version). Sweden artists are really great for pop music i love so much their music (Secret Service, Lili and Susie, Ace of Base, ABBA of course....) Thank you for the music guys !

October 7, 2016
Truly the best group ever produced by Sweden. I've always loved them and always will.
See 5 replies