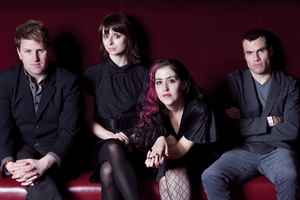 Profile:
Freezepop is a synthpop band from Boston, Massachusetts founded in 1999. The lineup includes Liz Enthusiam (Jussi Gamache) on vocals, The Other Sean T. Drinkwater on backing vocals, synths, and vocoder, and The Duke of Pannekoenen (Kasson Crooker) on programming. Freezepop's song Science Genius Girl was featured in the PlayStation 2 game Frequency and their song Super-Sprøde was featured in the game's sequel, Amplitude.
Freezepop won Best New Band in 2001 at the American Synthpop Awards and Best US Band in 2002.
The Duke of Pannekoeken was previously know as The Duke of Candied Apples and before that the Duke of Belgian Waffles. He is also the man behind Symbion Project and was a member of the alternative rock group Splashdown. In early June 2009, The Duke announced he was leaving the band.
The Other Sean T. Drinkwater is a clone of the original who was too busy with his first synthpop group Lifestyle (3), his solo work as Karacter, and his heavy metal group Godclaw.
In addition to singing, Liz Enthusiasm designs the art for the band's albums, designed their website and the website of Sean's other band Lifestyle, and has animated music videos for some of their songs.
Following the departure of The Duke, Seth Damascus-Kennedy aka Bananas-Foster was officially added to the lineup.
Sites:
freezepop.net, MySpace, Twitter, instagram.com, Bandcamp
Members:
Ashley Holtgraver, Jussi Gamache, Kasson Crooker, Sean T. Drinkwater, Seth Damascus-Kennedy

April 24, 2010
Freezepop is the standard for synthpop. There are songs even 5 years from now that will still be played! Continue on Freezepop!
Reply Notify me Helpful