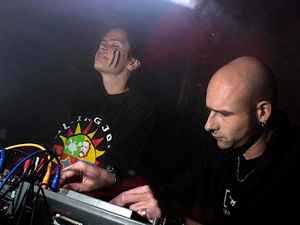 Real Name:
Andrea Börner-Schramm
Profile:
Morgenstern's dark music consists of strange, hypnotic loops, distorted powernoise and heavy death industrial tunes. Deep drones with occasional samples are slowly transformed into a quiet wind tunnel groan with sporadic echoes of thumps and bumps from far-off objects in the background. The music flows into a rythmic tribal drum ceremony where various pitches of wind noise through a pipe are layered in, while electrodes snap, a rythmic helicopter sounds and firecrackers pop. War-torn screams and cries are blended way into the background. Tribal powernoise rhythms and dark ambient: from ceremonial processions to hypnosis and hysteria, being relaxed on the outside and at the same time restless on the inside. Morgenstern was founded in '93 as the solo project of Andrea Börner, who was also a member of the legendary project Ars Moriendi (1990-95). She's still a part of the ambient project Templegardens. The production of Morgenstern's works is actively supported by Philipp Münch of Synapscape and Andreas Schramm of Asche.
Sites:
MySpace, Facebook
Aliases:
Andrea Börner

October 6, 2003
Aggressive and extremely dark.
It is pointless to seek the slightest bit of lighthearted joy in Morgenstern's music. And when experienced live, one will probably not see a single smile on any face. More likely all eyes closed, faces towards the ground, crowd losing themselves... or finding themselves.
Morgenstern (unconsciously?) helps painful memories and old fears get to the surface, lets one face their demons. Scary. And dangerous.