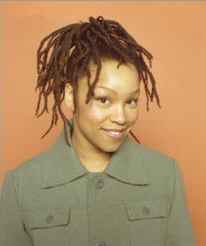 Profile:
Not to be confused with Linda Carriere of Dynasty.
Linda Carriere was born in London and took part in the British soul group Loose Ends recording the "Look How Long" album and singing among other songs "Don't Be A Fool".

In 1992 she started a solo career and moved to Germany.
She was the opening act for an Elton John concert in Aschaffenburg, performing for 50,000 people. She wrote songs for Randy Crawford and opened shows for The Fugees, Whitney Houston, Michael Jackson, Celine Dion and even toured with "The Soul of MTV" together with Bilal and City High.
In 2002 she released her solo album "she said..." and entered the Pre-Eurovision Song Contest for Germany representing her German home town, Aschaffenburg with her song "Higher Ground".
Sites:
YouTube
In Groups:
Loose Ends
Variations:
Viewing All | Linda Carriere
Carriere, Carrière, L. Carrier, L. Carriere, Linda Carrier, Linda Carrière, Linda Carriére