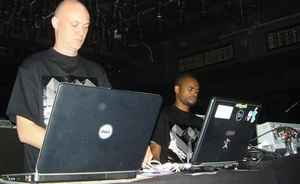 Real Name:
Anthony Gallagher, Carl Grant, Chris Johnson
Profile:
LA Synthesis were formed in South London in 1992. Originally from Liverpool and Birmingham, respectively, Tony Gallagher and Carl Grant met on the fringes of the underground party scene in South East London. Discovering a shared and relatively eclectic pool of influences in common - ranging from Model 500 and Black Dog to Kraftwerk and systems composer Steve Reich - the pair began experimenting with their own tracks, though it wasn't until promotional copies of Agraphobia began to emerge towards the end of 1994 that the duo started to attract attention. Later on they were joined by Chris Johnson, a session keyboardist who worked with Shirley Bassey.
Sites:
Facebook, SoundCloud
Members:
Anthony Gallagher, Carl Grant, Johnny Astro
Variations:
All | Viewing LA Synthesis
L.A Synthesis, L.A. Synthesis, L.A.Synthesis

July 11, 2012
Agraphobia is one of the greatest pieces of electronic music ever made. It's been a favorite since I first heard it on the Apollo 2 compilation (1995), and it's never gotten old. Absolutely epic. Wish these guys could have done a bit more.
See 1 reply

June 11, 2003
One of the chaps from LA Synthesis worked in a second hand hi fi shop just down the road from me.
They got themselves into a shady contract with Mr C and were not treated that well, pity coz with a little more dosh behind them they could have carried on. Everything they did release was truly superb, and that agraphobia is one of my favourite records, although I still don't actually own a copy.

They won't release anything now, I think the last release was on CARL COX's label, which has a wicked track on the B SIDE co-produced by TOM MIDDLETON. They also contributed a track to Ross's label, district SIX.

Anyone into the detroit sound should check these guys, there's one release on the Evolution label that has a track called Harmonic Dissembly, if ever you hear the Jedi Knights play out your bound to hear them drop this - serious electro for the dancefloor!!!!!!!!!!