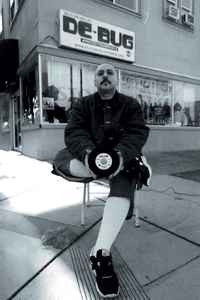 J.M. Valle grew up in East Side San Jo (California), just blocks away from historic King and Story Roads. Mr. Valle’s grandfather came to the United States under the Bracero program, a government program that helped fill farmworker labor while a majority of Americans were serving in World War II. Mr. Valle’s parents were both farmworkers who moved to San José in the late 1970’s during the height of San José’s low-rider capital to work on the computer assembly line. While Mr. Valle’s parents were chasing the American Dream, Mr. Valle endured a flawed education system, police harassment and brutality, and everyday survival of the barrio.

Although the Souleros Ball showcased live performances since its inception, the Souleros Ball became a game changer in 2011, after a live performance by Myron and E of Timmion Records (Finland, Europe). This event constructed a bridge between contemporary recording artists and the Raza. At Mr. Valle's request, Myron and E performed a cover of The Exit's "Under the Street Lamp", which later led to a record contract with Stones Throw Records. During the same year, Wax Poetics Magazine released a cover story of the growing Chicano Rare Oldies scene which featured Mr. Valle and his contributions to the movement.

In 2015, J.M. Valle wrote and directed the screenplay for the The Jack Moves "Joyride" (Wax Poetics) music video. The music video depicted la Chicanada with cameos of OG Dave (Barrio Brawler), Victor Barrera (Duke of Earl Movie), Roberto Hernandez (SF Lowrider Council), and Big Serg (The Principal). Filmed in San José, San Francisco's Mission District and Oakland, the video is also dedicated to Sonny Madrid, founder of Low Rider Magazine and Teen Angel, both of which had their break in San Jo, and passed during the same year.

After trial and error, J.M. Valle formed Thee Baby Cuffs made up of Joe Narvaez, Gilberto Rodriguez and Dave Herrera and began his songwriting and producing career.

In 2017, Mr. Valle self released a rendition of Larry Sanders’ “Where Did Peace Go” backed by The M-Tet (Bay Area). Mr. Valle re-worked the lyrics to describe the plight of Raza and re-titled Larry Sanders’ protest song to “Where Did Our Pride Go”. Digital formats and streams were released during anti-presidential inauguration protests nationwide when Trump took the White House. A 45 release followed during the same year on Cinco de Mayo.

The following year in 2018, Mr. Valle wrote a song titled, “My My My Baby” about his early relationship with his wife, getting married and having a family, yet challenged by family members who naturally wanted to shield their baby girl. “My My My Baby” was recorded as a demo which never came to surface at Chris Lujan's (Lugnut Brand Records) studio bedroom. Cold Diamond and Mink (Stylart, a subsidiary of Timmion Records) cut an uptempo version which gave both Mr. Valle's songwriting and his group, Thee Baby Cuffs an international platform.

In 2019, J.M. Valle released a reissue of Suenos “Baby I Love You” with the Spanish version as the B-Side for the first time on 45. J.M. Valle previously reached out to band leader Frank Lizarraga to perform at the Souleros Ball in 2013 in the band’s hometown in Sacramento, Ca.. Suenos “Baby I Love You” was originally pressed in 1982 as a single on San Jose’s Luna Records with a Spanish version released on their album the following year. The Spanish version never cut as a single and the sought after English version never made an album release making this reissue unique.

Aside from Mr. Valle’s music career, he also wrote for Street Low Magazine making two cover stories, one of which being R&B Bay Area artist, Davina. Mr. Valle also broke the Souleros Ball in an article he wrote in Street Low Magazine which had Benjamin Bratt starring in the La Mission movie as its cover story. Mr. Valle also wrote for Teen Angel Magazine including its cover story of tattoo artists Pistolero Viejo which was also the last issue to print. J.M. Valle has also curated various art shows featuring art from prison and local artists. Lastly J.M. is known for his work in the community including prison reform, prisoner’s human rights, working with youth, historic preservation and mural advocacy.
Sites:
razadelsoul.com