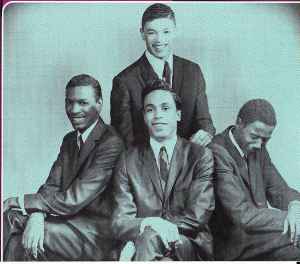 Profile:
The Cavaliers had these two different phases to their RCA career, starting off with self- penned Detroit dancers like 'Hold On To My Baby' and the unreleased 'Without Someone To Tell Me' on the initial four song session. They then recorded Banks and Kelley's 'Ooh It Hurts Me' along with their own 'It's Guaranteed' on a shorter second appointment. On their final session they cut two ballads originally written for Kenny Carter 'I've Gotta Find Her' and 'Living In The Land Of Heartache' along with Larry's own Kapp single track 'Muddy Water'. By then Joe Hunter had been replaced by New York veteran producer Teacho Wiltshire, and Larry and Teacho finally got credited as producers with Paul Robinson being "moved upstairs" to executive producer.
Bobby Croft as the main lead singer on three of the four tracks while Johnnie Williams sang lead on the other. Jerome Averette and Keith Illidge were the other members. By the second session Willard Franklin Jr had joined the group and by the final New York produced Bobby Croft had left, leaving Johnnie Williams to take all four solos. Keith Illidge, now known as Keith Loving, from his mother's maiden name, remembered the group singing the vocals over the musical tracks
Members:
Bobby Croft, Jerome Averette, Johnnie Williams, Keith Illidge