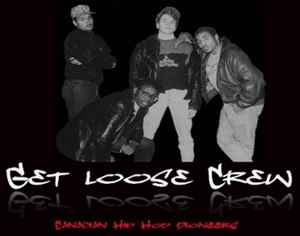 Profile:
Get Loose Crew was a Canadian Hip Hop band formed by 'D.J Jel' Chris Jackson, 'Rapper' Kory Neely aka MC Shadow and Len Grant-Stuart aka 'Mix-Master Len' in Toronto, Ontario, Canada 1987. The Get Loose Crew took on additional rapper 'MC B' Carl Badwa who joined the band prior to the release of their album in 1988.
The group established itself as part of not only the Toronto music scene but in Canada also, releasing its first self titled album "Get Loose Crew" for their self established independent record label East Park Productions in February 1988. After signing with Electric Distribution - (ZGARKA-KAYE Distribution Ltd.), The Get Loose Crew accomplished becoming the first Canadian rap group to produce a mini LP and the first Canadian rap record to achieve sales internationally. Despite success on local urban music charts, being featured on television in Canada and radio airplay in the United States the group did not release a follow up project. Subsequently, group members disbanded to pursue solo projects pioneering independent industry achievements.
The originality of the group was the frontman lead vocalist MC Shadow, whom as a white rapper was not only unique to the genre itself becoming the first to be recorded on vinyl in Canada, but only second internationally to established American band "Beastie Boys".
Sites:
Wikipedia, Facebook, Twitter, MySpace
Members:
Kory Neely, M.C.B., MC Shadow

December 23, 2016
This is some reeeeal Old School Canadian Hip hop. First white rapper in Canada and second in the world on vinyl after the Beastie Boysl!!! Totally vibin on Get Loose Crew & Rap Vigilante. Wannabe is cool.
Reply Notify me Helpful