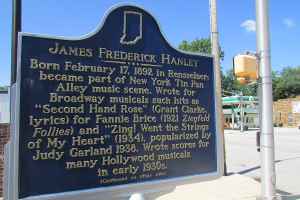 Real Name:
James Frederick Hanley
Profile:
James Frederick "Jimmy" Hanley (b. Rensselaer, Indiana February 17, 1892 – d. Douglaston, Long Island February 8, 1942) was an American songwriter and author. Began as a vaudeville accompanist and went on to write songs for film and theater including many Broadway productions. Best remembered for the hit songs "Indiana" (1917), "Second Hand Rose" (1921) and "Zing! Went the Strings of My Heart" (1934). For the latter song, Hanley contributed both music and lyrics but for most of his songs he wrote the music alone.