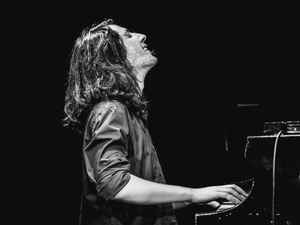 Profile:
Gabriel Zucker is a pianist, composer, and multi-instrumentalist from New York, whose work combines maximalist compositions with the progressive improvisation of New York’s creative music scene. His music has received two ASCAP composition awards, and was awarded 4.5 stars in Downbeat. A Yale graduate and Rhodes Scholar, Zucker has performed throughout New York at such venues as Carnegie Hall and the Jazz Gallery as well as in 18 countries around the world.

Zucker’s primary project, the indie jazz orchestra The Delegation, was born at the Banff Jazz and Creative Music Workshop. The group’s debut record, a twelve-movement composition titled Evergreen (Canceled World), was supported by an American Composers Forum JFund grant and released in October 2016 on ESP-Disk' to critical acclaim. The ensemble’s sophomore release, Leftover Beats From The Edges Of Time, is due out in 2019.

Zucker is a manager of the prominent experimental music venue Spectrum, where he curates the eclectic monthly series Spectral Fridays. A committed social activist in addition to a musician, Zucker has worked on poverty policy research with the Abdul Latif Jameel Poverty Action Lab at MIT, co-led the successful campaign to end veteran homelessness in Connecticut, and is currently a member of the U.S. Digital Service, where he works on homeless services and healthcare access at the Department of Veterans Affairs. He graduated summa cum laude from Yale in 2012, where he double majored in Ethics, Politics, & Economics and Music, and he holds a Masters in Applied Statistics from Oxford, where his research focused on applications of machine learning to social policy administration.