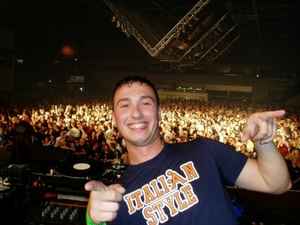 Real Name:
Diego Buffoni
Profile:
He started his music career as an hardcore Dj producer when he was only 16 years old. He made (now too!) his music only with an simple PC, not anymore! The story of Hardcore Blasters label is deeply attached to Dj D's, since the label was born after he gave (1999) a tape demo to Simone (chairman!) and he like it. Of course the first demo was not released on vinyl (however insert on Jump vol.1 compilation), but with this one , DJ D career could have to start! During 2000 Dj D try to improve the sound quality of his products, so in November 2000 , with his friend Luca Morlini (Dj Lux) performed his first record DJ D vs DJ LUX "Inside myself E.P." and Hardcore Blasters label started to moved! Through the years he improved his sound quality level, performing some remixes for some djs! Hits like "Original Style" DJ D remix was been included into several hardcore compilations and played by some famous Djs like Promo,Endymion,Nosferatu. During the 2002, he started to develop his own unique style of production which resulted in his first 10" record called "X-ploration" which was released in June 2002. "Mankind warning" was the hit-track played by several djs like Endymion & Nosferatu in some parties! It was included in several important hardcore compilation like MOH, Always Hardcore,Hardcore Ressuretion and many other... So after this project, Dj D performed a remix of "Getting High" for Ferox released on Bionic records, for The Blaster, B 747 & Angels of Darkness. Together with Valentino Oliviero (The Blaster), he became PSYCHORUDES and he is 50% of Angels of Darkness & Noize Creator too! Later he created two albums; DB Area and The Melody Man. His greatest hits came in 2007 and 2008 with "Gloria" and "Imagine (When I Found You)". Several other hits followed, as well as collaborations with new producers of Hardcore Blasters like Nitrogenetics and Rayden.

In 2013 Diego Buffoni announced his retirement from the hardcore scene and from Hardcore Blasters. He stated that he no longer has the time to keep quality of his production high. At that time he had a 16 months old daughter, choosing family above music.
Sites:
diegobuffoni.com
Aliases:
2B8F, Diego Buffoni, HB Crew, Overdrums, X-Fade (10)
Variations:
Viewing All | DJ D
D, DJ D., DJ. D, Deejay D.