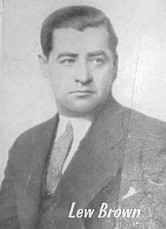 Lew Brown was a lyricist for popular songs in the United States. In 1925, Brown became one third of the songwriting team with lyricist Buddy G. De Sylva and composer Ray Henderson. DeSylva, Brown and Henderson became one of the top Tin Pan Alley songwriters of the era.