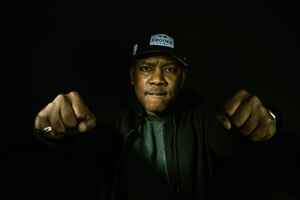 Real Name:
Gary Francis
Profile:
Foundation Mc from Hackney, London.
Used to be part of the Squadron sound system with [DJ Spoony] before starting to MC Hip-Hop under the name of MC Juice. Resident MC at A.W.O.L.

Since its inception back in the early 90's Jungle drum&bass has developed at an amazing rate, yet certain themes and characteristics have remained true - The charisma, presence and distinctive voice of MC GQ is one such characteristic of the scene that has stood firm.

MC-ing at the top of the chain for more than 20 years has taken GQ to all the corners of the globe, seen him achieve chart success and in 1999 an opportunity to establish his own label, Emcee Recordings, that helped break some of the leading names in D&B today such as Jubei, SP:MC, Breakage & Sabre.

MC GQ has been able to work with every top DJ over the years and at a mix of events around the globe ranging from massive festivals to small intimate events. GQ’s ability and consistency to work with every topflight DJ has kept him at the top of the MC ranks for 20 years and has made him partner to pretty much all of the A-List DJs in the world of Jungle & D&B.
Sites:
esp-agency.com, whosampled.com
Aliases:
Gary Francis (5)
Variations:
Viewing All | MC GQ
GQ, M.C. GQ, M.C.G.Q., MC G.Q., MC QG, MC. GQ