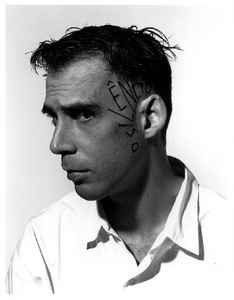 Real Name:
Arnaldo Augusto Nora Antunes Filho
Profile:
Born 02/09/1960, São Paulo, Brazil
Brazilian writer and composer. He began as a member of the band Aguilar e Banda Performática in the late 1970s. For most of the 1980s he was a member of the rock band Titãs. After 1992 he started to release solo albums. Since 1992 he has been an award winning poet, but was first published in 1983. Abroad he is noted for collaborations with Marisa Monte.
Sites:
arnaldoantunes.com.br
In Groups:
Aguilar E Banda Performática, Pequeno Cidadão, Titãs, Tribalistas, Vestidos De Espaço
Variations:
Viewing All | Arnaldo Antunes
A. Antunes, A.Antunes, Andunes, Antunes