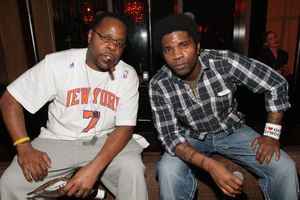 Both originating from Brooklyn, NY (Skoob) and Teaneck, NJ (Drayz) - they teamed up while in college at Virginia State University. After coming in second place at a talent contest judged by EPMD, Parrish Smith of EPMD signed the duo to their label. Joining EPMD's burgeoning Hit Squad group of rappers. Das EFX quickly rose to the forefront of the hardcore rap scene. Their first offering, Dead Serious, cut right to the chase, introducing a new style of rap with fast lyrics often interspersing the word "diggety" throughout their rhymes. Dead Serious eventually went platinum. Their second release, Straight Up Sewaside, appeared the following year, followed by 1995's Hold It Down. The group was derailed by the popularity of their own style, which was often copied by others, making the originators less potent.
Sites:
MySpace, YouTube
Members:
Andre Weston, Willie Hines
Variations:
Viewing All | Das EFX
D.EFX, DAS EFX, DAS-EFX, Da Efx, Das - EFX, Das E.F.X., Das Efx, Das FX, Das Fx, Das-EFX, Das-Efx, DasEFX, Dasefx

December 30, 2016
What can you say about Das EFX? Hip-hop originals in every sense of the word. I think it's impossible to listen to Hip-hop and not know who they are. If you're trying to catch up, the track: Check It Out on Straight Up Sewaside is the quintessential Das EFX track-- you'll understand who they are immediately.

Only bad thing is a lot of the censored LPs were in circulation during the 90s, and it's almost impossible to find their first two albums uncensored (how it should be heard).
See 1 reply