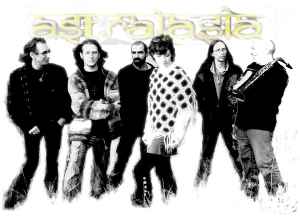 Fabriknos has already provided an excellent band overview, so this entry is more of a footnote, and maybe a tip for those looking for Various - Astralasia And Friends - The Darkest Voyage, which is not currently listed in this band's discography (although I tend to think it should be), but instead, is treated as a various artists release. The 6 CDr version has 35 tracks and 24 artists, working with source tracks developed by Marc Swordfish (Astralasia) and shaped into newly constructed pieces by the 24 artists, which include Astralasia and 23 others, many of which are among the "usual suspects" from the Fruits de Mer Records, Strange Fish, and Fungus Records group of artists. Names like Icarus Peel, The Blue Giant Zeta Puppies, Nick Nicely, Us and Them, Kris Gietkowski, Craig Padilla, The Lost Stoned Pandas, and Jack Ellister, are just a few of the artists featured on this sprawling collection of ambient psychedlia built and shaped from sounds created during pandemic-isolation.

The 2LP version (Various - Astralasia And Friends - The Darkest Voyage) has 10 tracks by ten artists, all of which appear to have been taken from the 6 CDr edition, but I have not yet had a chance to compare track times or mixes between the two releases to know whether the 2LP set is simply a distillation of tracks from the 6CDr set, or whether there are any diffferences.

As Keith from Fruits De Mer states in the liner notes, "The Darkest Voyage is very much a Swordfish project - Marc came up with the idea, he recorded the source tracks, he has made it all happen - but it's been exciting to be part of the journey as friends of Fruits De Mer have contributed individual elements and complete tracks, taking the voyage into new, unexpected territories." Notably, the label hopes to raise £2,000.00 from the sales of the CDr and LP sets to benefit the Red Cross. Fans of Astralasia as well as the various contributors and collaborators on this release, should seek out this collection to attain immediate weightlessness.

I can't believe after all these years of listening to Astralasia that I haven't left a review for this unique, eclectic, and influential electronic music group. Well I'm here to make amends for that oversight. Astralasia is, without a doubt, one of my all time favorite artists. Most of my friends and peers don't seem to get them, or why I like them so much. But it's not just a guilty pleasure. Astralasia hasn't necessarily made the best individual ambient, trance, or dub tracks in the world - but they are one of the best to mix these styles together in a convincing and completely unique way. There are only a handful of other artists that even begin to approach this kind of creativity between the genres: Gabriel Le Mar, Adham Shaikh, Eat Static and Banco de Gaia spring to mind. But Astralasia really is in a world all their own.

From their humble beginnings in the late 80s as an offshoot of psychedelic rock group The Magic Mushroom Band, Astralasia was initially influenced by the burgeoning UK acid house scene, and their early material is a reflection of this time period. They were also one of the first artists you could classify as "trance" with their faster and more hypnotic approach to the straightforward sounds of acid house. But it was on their second LP, Politics of Ecstasy, where they started to really find their niche - the world of psychedelic ambient dub. PoE still retained some of their original trance / rave sound from before, but you began to hear them embrace this new chill out sound. The third LP, Pitched Up At The Edge Of Reality, was the album that saw them rise to the top of this new sound and put their stamp on it, paving a way for many other artists to follow. Plenty of mid-90s ambient dub artists must have heard this sound coming out of the UK and found inspiration in it: I can easily imagine Loop Guru, A Positive Life, Higher Intelligence Agency and Banco de Gaia being very influenced by this stuff. Hard to say now who influenced who, but one can imagine :)

Astralasia only improved on their ambient dub brilliance with Whatever Happened To Utopia? Arguably their trademark release, some of their best ambient music can be found here and it hasn't aged in the slightest. But never one to stay with one sound too long, Astralasia switched gears on their next two albums, Axis Mundi and The Space Between, which were almost 100% trance. They started to become known as a trance group again, reaching a new audience thanks to the growing popularity of trance worldwide, as well as their new distribution deal with Hypnotic Records in the US. This visibility was only enhanced with the release of The Seven Pointed Star in 1996 - an amazing mixture of high energy goa trance and deep, spatial ambient.

Astralasia would continue forging ahead in this world, remixing a plethora of artists from all over the spectrum with high energy trance versions. Because of their association with Hypnotic (part of Cleopatra), they were tapped to provide remixes for numerous alternative and industrial artists on the labels, like Spahn Ranch, Gary Numan and Gene Loves Jezebel. Unfortunately, I think this activity gave them a reputation of being something of a generic trance act, while their own music was often overlooked. Astralasia's trance phase culminated in 2001's Something Somewhere, an epic trance album which to me is the weakest one to date, and finds them as far from their psychedelic roots as ever before.

Astralasia then took an extended break from music from around 2001-2006. A few remixes popped up here and there (including the surprising remix of Bob Marley's Put It On) but for the most part they went quiet. I think this hiatus allowed them to refresh and refocus, and it resulted in them making a return to their psychedelic rock roots while introducing some new downtempo vibes as well. Away With The Faeries and Cluster of Waves both feature a much more organic and rich production value, and quite a bit more live instrumentation than in the past. I imagine Swordfish was getting tired with purely electronic music production, and needed an acoustic influence again. Who can blame him? Almost 20 years of rocking out will do that to you :)

And that's basically where this brings us today (late 2014). Astralasia has gone all over the spectrum, pioneering the sounds of trance and ambient dub, and returning to what inspired them in the first place. While I personally am not a huge fan of psychedelic rock, I give Astralasia credit for exploring whatever they want, on their own terms, with zero mainstream intent. I am just happy to be able to join them on the ride and can't wait to see where they head next.