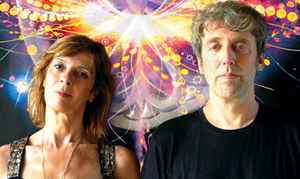 Profile:
UK-based techno and ambient outfit System 7 was formed by Steve Hillage and Miquette Giraudy in 1990. Both had previously been key members of the pioneering psychedelic space rock collective Gong in the seventies, and Hillage also released a string of solo LP's including the hugely influential ambient LP "Rainbow Dome Musick".
When the underground dance music movement exploded in the UK at the end of the 80's Hillage and Giraudy decided to fully embrace the new wave of electronic music, and that is where System 7 began. However,.rather than simply being a duo, System 7 has sought to maintain the project by choosing a very dynamic range of collaborators to work with. and the results of those collaborations have produced some of the very best electronic dance music releases over the last three decades. They have worked with such luminary artists as Derrick May, Alex Paterson (of The Orb), Carl Craig and Laurent Garnier. Plus many more.

August 17, 2019
In 2019 I´ve seen Steve H. and M. Giraudy live at the carribean beach. The evening set with System 7 was outstanding, the morning set with mirror system was extraordinary. I´ve always been glad to listen their Steve H. , Gong or Orb stuff from time to time, but the system 7 stuff is unbelievable good.

August 7, 2010
System 7 remains a favorite act of mine despite current trends and changes in electronic music. They have consistently produced outstanding techno, trance, ambient and downtempo, jumping genres at their convenience, almost always with the trademark glissando guitar from Steve Hillage. Their collaborators could fill a book, and their live shows are legendary. They personify live techno/trance. Also a kind word about Steve - I emailed A-Wave Records after purchasing a new copy of Phoenix that had some weird audio glitches in a couple tracks, and Steve himself sends me a package in the mail with a new copy of Phoenix, Live Transmissions, and Encantado. What a surprise and what a class act. Thank you for all the music and memories, and we all hope you do another US tour because you are sorely missed out here!

I had the pleasure of meeting a very sleep-deprived System 7 in 1995, when they provided a 30-minute live mini-performance at a rave my friends & I organized at a fairgrounds in the midwestern United States. I spent some time chatting with Hillage, who was a kind, genuine and gracious man, and also a bit of nerd's nerd when it came to music and technology - qualities I'm sure many Discogs users can appreciate. Despite being perhaps a bit taken aback by how primitive, small and unpolished the party was, Steve expressed nothing but pleasure and contentment with the vibe and the opportunity to perform for a receptive audience, and he was thankful for the efforts of the exhausted promoters as we scrambled to accommodate our guests. His sentimental humanity and personable manner remain fixed in my memory as part of the essence of System 7, and changed the way I interpret their music.

Steve Hillage's career stretches back beyond the memory of the oldest members of the tribe and into the age of legend.
Rock Books mistakenly list his date of birth as
August 2,1951,but it is thought that Stonehenge was originally constructed as a stage set for an early Hillage gig and that the Long Barrows in Wiltshire were where he stored his cumbersome,pre digital gear.

July 25, 2002
Steve & Miquette have evolved the System 7 (or 777 as they
are called in the US) during various eras / phases of music
technology and styles. If you see them play-out in 2002,
your experiencing a briliant energy which has persisted and graced their musical journeys since the early seventies.

The best techno/trance/ambient outfit on the planet.
Always fresh DJs onboard whenever they gig..//ib