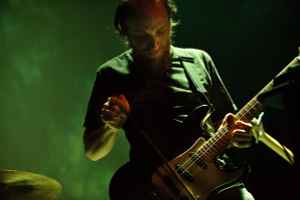 Real Name:
Aidan Baker
Profile:
Aidan Baker is a classically-trained multi-instrumentalist using the electric guitar as his primary instrument. Using prepared and alternate methods of playing the guitar, along with various electronic effects, Baker creates music which generally falls within the ambient/experimental genre but draws on influences from rock, electronic, classical, and jazz. A highly prolific artist, Baker has released numerous recorded works, both solo and with various group projects, on such independent labels as Gizeh Records, Important Records, Alien8 Recordings, and his own imprint, Broken Spine Productions. Originally from Toronto, Canada, Baker currently resides in Berlin, Germany.

This guy releases too much for my taste.

Regardless of the individual quality some of his albums may possess, there is zero anticipation for anything of it. Just a steady stream of releases without a feeling of suspense. Compare this to the level of excitement for a new Aphex Twin release, or more on par, say, Taylor Deupree or Rafael Anton Irisarri. There's a feeling of a true and carefully refined musical event each time, not just a "oh another one" shrug.

April 12, 2010
Aidan Baker is a musician and writer currently based in *BERLIN*

he moved to Berlin
See 1 reply